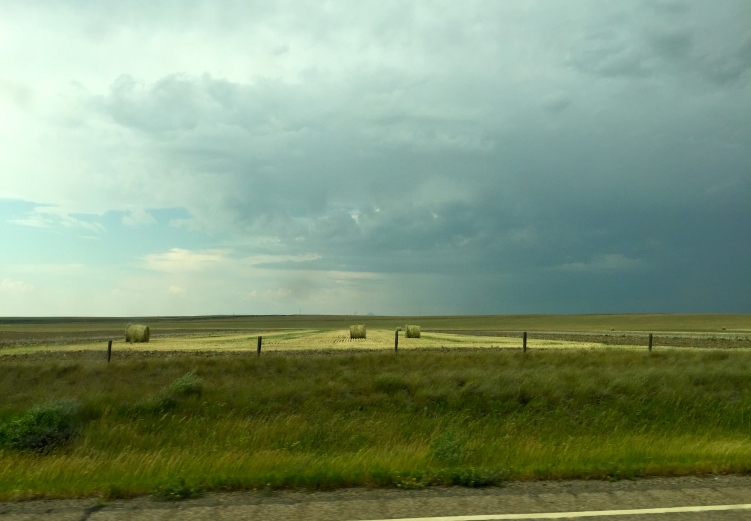 Driving through the plains, there is lots of time to think. Between the few small towns from Browning to Havre, the road is 2 lanes, flat, straight ahead, with very few other vehicles. There are subtle landscape differences in fences and gates, an occasional small lone house and outbuildings. The expansive land may be planted in grain or beans, but more commonly is range or grassland, often being cut for hay.

There is a palpable sense of solitude. 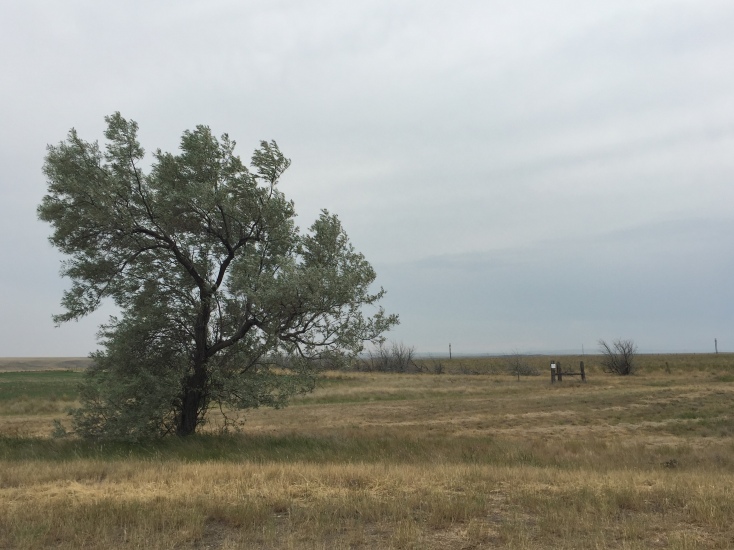 US Route 2 is the northernmost east-west (or west-east) road in the country, and in part follows the Theodore Roosevelt International Highway, originally planned in 1919 to connect Portland, Maine to Portland, Oregon. The road closely parallels the path of the Great Northern Railroad, active today as the BNSF (Burlington Northern Santa Fe) Rail.

With Google pretty much at one’s fingertips, it’s easy to get carried away with curiosity….

For instance: the Great Northern Railway was the only rail built without any government subsidy (check out James J. Hill) and it was that railroad that carried cars traveling US Route 2 through Marias Pass along the southern boarder of Glacier National Park, until the road was completed in 1930.

Trains and lone rail cars were frequent companions on this leg of the journey.

A small, family run campground, a few miles off the highway in Havre (there were not many campground choices) was home for the night, quiet and grassy, surrounded by prairie. 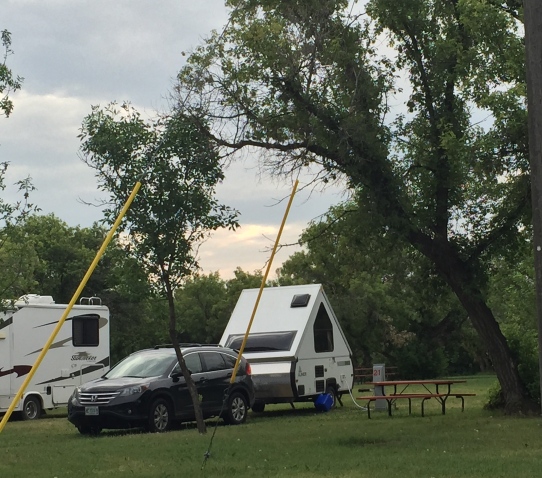 Checking the route as we set out the next morning, I discovered that the Bear Paw Battlefield was actually 15 miles south of Chinook, which meant a 30 mile detour.

But there is always discovery in the detours.

Amidst the seemingly endless grasslands, this schoolhouse:

Serving as a place of learning for a little more than 40 years, curiosity again sets in… how many students came here? How far did they have to travel? What grades were included? Why did it close? Etc. etc.

No cell service for Googling, and my mind had shifted to the story of the Chief Joseph and the Nez Perce War of 1877.

Which wasn’t really a war, but rather the unsuccessful attempt of the Nez Perce people, originally from Oregon, to escape being forcibly placed on reservations by seeking refuge in Canada.

Bar Paw Battlefield commemorates the violent and tragic end of a 1,170 mile attempted journey to freedom.

The site is one of several that are part of the Nez Perce National Historic Park, located in four different states. The Bear Paw site is modest: a few stone markers with plaques, a few covered picnic tables, an informational kiosk and a vault toilet.

I thought I would be alone to explore, but there was a white pick-up parked by the kiosk. As it turns out, the park has a seasonal Ranger named Jim Magera.

Jim is a retired history teacher from Havre whose special area of interest is Native American history. He works from 10 – 2 during the summer months, “keeping an eye on things” at the site. In addition, he is filled with knowledge, which he loves to share, and share he did.

Jim graciously offered details and explanation, expanding my understanding of what took place here 138 years ago.

A final battle with US Military who had been pursuing Chief Joseph and his now weakened group for over a thousand miles. It was winter, there were women, children and elders…. only 40 miles from the Canadian border.

It was windy and cool as I walked the trail alone that winds through the battlefield. 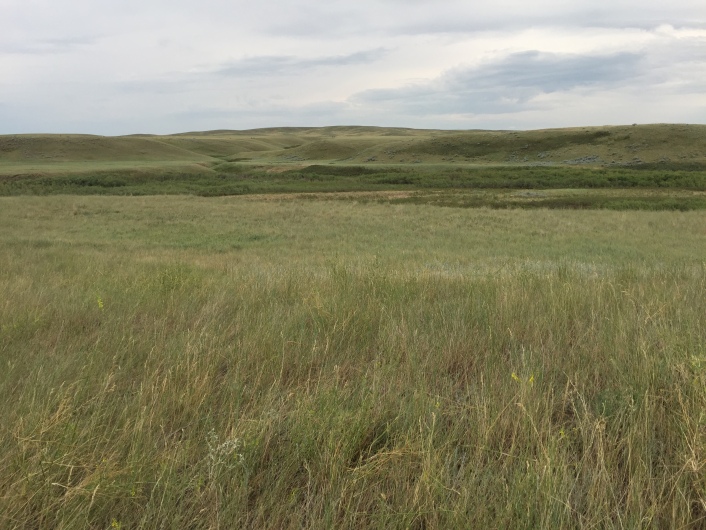 Because of the loss of life, the Nez Perce consider this a sacred place of commemoration. It is visited by descendants,who often leave tokens at marker sites.

Or, in the trees. 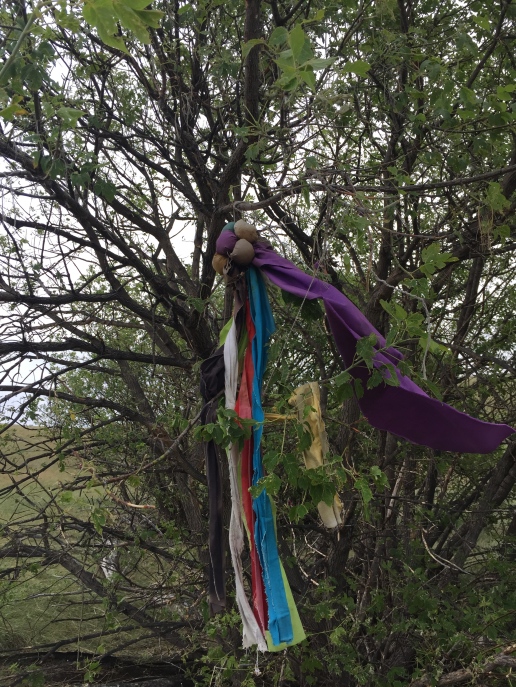 It was in Yellowstone, some 400 miles away, that I first visited a meadow with a historical marker. The site was noted as a place that Chief Joseph and his people (including elders, women and children) had stopped. There had been an altercation with some tourists visiting Yellowstone- the tourists were captured and then released unharmed. Chief Joseph and his people moved on.

It was in Yellowstone that I decided to come to the place where the journey ended. I’m not sure why it became important. Perhaps because I am noticing that through witnessing a place, wandering through a field,  a deeper sense of what is truth might be understood.

I’m sure I was exposed to the concept of “manifest destiny” during high school study of the westward expansion. “Manifest destiny” being the widely held belief that fueled American policy and action in the 19th century: that it was both the duty and the right of  the United States to expand westward. No matter who or what was in the way.

From the park brochure:

“Far from our beautiful homeland, upon this quiet terrain of our Earth Mother, the spirits now forever bear silent witness to our people’s painful and tragic encounter with “Manifest Destiny.” This is a place for mourning, not just for memorializing a past, but as a place for letting go of what might have been. Nations consecrate other battlefields in memory of lives lost, so too, may each of us now consecrate this place on behalf of our ancestors’ exhausted bid for freedom.”

Surrounded by prairie, there is opportunity for solemn contemplation of the genocide that took place as part of history of our country.

This must be the reason it was important to come here.

2 thoughts on “The Great Plains, Trains and Manifest Destiny: Browning to Terry, MT”