Do not do anything harmful

Do only what is good

Discipline your own mind

This is the teaching of the Buddha

Atlas Obsura is a website that allows you to enter a travel destination, and then provides “curious and wondrous” places that are in the vicinity. Having decided that Glacier National Park was the next destination, a consultation with the “atlas” suggested traveling through Arlee, Montana for a visit to The Garden of One Thousand Buddhas.  Within 100 miles of Glacier, Arlee has a small campground and is 16 miles from the National Bison Range.

An easy 197 mile drive, backtracking west on Interstate 90 to Missoula, then north on Highway 93. Open and rolling Montana range, edged with the piney mountains of the Beaverhead Deerlodge and Lolo National Forests.

A common sight, with lots of variations throughout the west, I’d been wondering about the logs that mark the a road or drive leading to a ranch. It took awhile to even discover that they are called pole gates. But why the design? In earlier times, before our modern road systems, with multi-acred ranches spread widely,  a pole gate could be seen from miles away on the uncluttered range, and easily guided the way to a ranch house.

The things discovered when wandering…..

Jocko Hollow Campground only has 8 sites, and is owned by a couple originally from Monterey, CA. Donna, probably in her late sixties, was mowing the small site area, nestled along the Jocko River. She shared her story, which included the fact that a campground in Montana was her husband’s idea, and it was only recently that she joined him, reluctantly, here. Originally from Germany, Donna missed living by the ocean, but was helping make a go of the little place. The bathroom and showers were clean, and I had my pick of sites, which included a picnic table with an umbrella. A lovely spot for the night.

Donna suggested that visiting the National Bison Range at dusk would be best. After setting up camp, Bella and I headed out to explore. 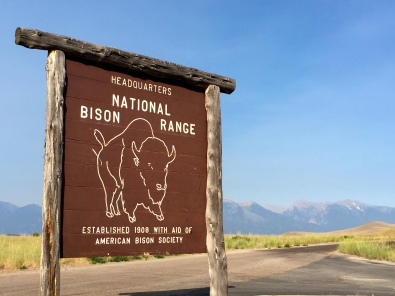 It was in 1908 that the Range was established through the work of Theodore Roosevelt, and the first time congress appropriated tax dollars specifically for wildlife conservation. We headed out one of the two roads through the 18,500 acre range, to see what we could see.

There had been bison throughout Yellowstone, but choosing to stay away from the crowds never allowed being within close range. The largest mammal living in North America, the opportunity to observe bison more intimately, gave a much better perspective of these noble creatures: 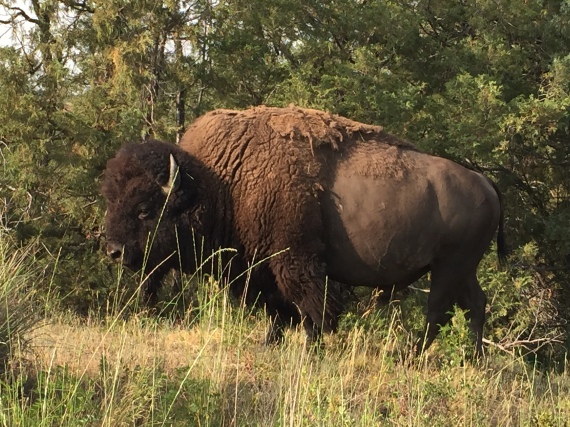 This lone male was not far from a larger group, including cows and calves:

Bella was uncharacteristically quiet, and we watched this group criss cross with a group of deer (you can sort of see them in the background- I’ve relied only on my phone for picture taking, with quality compromised for ease…)

It is a stunning fact to consider that prior to the westward expansion in the 1800’s, bison herds numbered 30 to 60 million, with a range from Canada to Mexico, and as far east as Tennessee and Pennsylvania. In a mere 40 year period of sport hunting, millions were slaughtered, with only 100 known bison remaining at the turn of the century. With no congressional “endangered species” protection at the time, it was the work of early conservationists (including Theodore Roosevelt, who paradoxically was an avid hunter) that saved the bison from extinction.

Not entirely free to roam where they will, nor in the massive numbers that existed in the past, seeing and being in the presence of these creatures is a powerful link to our country’s often troubling history, and how we deal with the aftermath. Lots to contemplate and learn about….

We broke camp and headed out early the next morning, as no dogs are allowed in The Garden of One Thousand Buddhas and Bella needed to wait in the car while it was still cool… always part of planning when camping with a pup. I was not entirely prepared for what awaited: 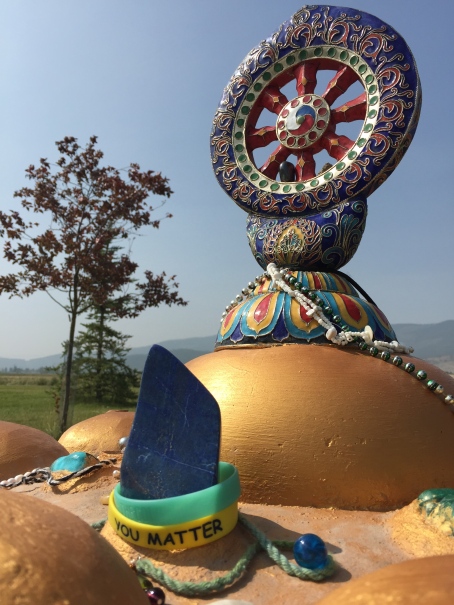 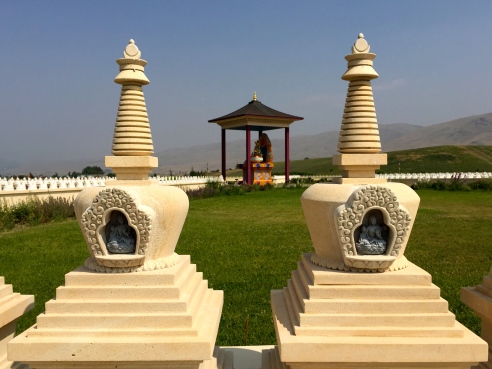 “Arising from the heart of the Hocko Valley in Western Montana is an instrument of Peace for the entire world, the Garden of One Thousand Buddhas. Created as the compassionate wish of Tulku Sang-ngag Rinpoche for the benefit of all beings, … as an antidote to the negativities which threaten our world today….” from the brochure.

This garden is the on-going work of an esteemed Tibetan Rinpoche (teacher), and is also a meditation and teaching center. Tulku Sang-ngag’s story and the creation of the garden are worth learning more about (see the link above). The beauty and serenity of the garden within the Montana landscape, in the early morning…. gratitude. 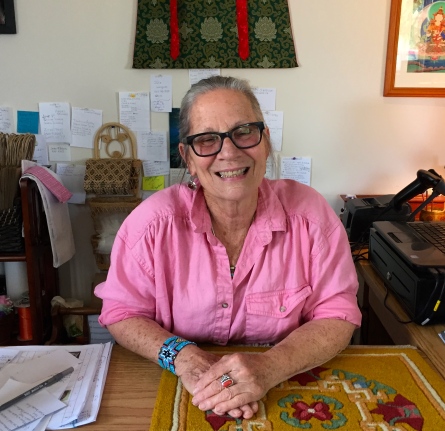 A stop into the small gift shop gave me the opportunity to meet Rosemary, who lives and works at the garden. She also owns property nearby, but is called to be part of the sangha (community) and mission of her teacher, Rinpoche Sang-ngag. We chatted about life’s journeys, and how we often end up where we least expect ourselves at times….

And how sometimes we end up, without planning, just where we need to be.